The Bible is a dangerous book. That’s why secular regimes outlaw the Bible. They know that putting a Bible in the hands of the proletariat is subversive to the totalitarian pretensions of the regime. That’s a recipe for revolution.

“Modern society is hypnotised by socialism. It is prevented by socialism from seeing the mortal danger it is in. One of the greatest dangers of all is that you have lost all sense of danger. You cannot even see where it is coming from as it moves swiftly towards you. Socialism of any type leads to a total destruction of the human spirit… to destroy a people, you must first sever their roots.”

From a Puritan Board discussion on why the Apostle Paul didn’t command Philemon to immediately release Onesimus as a slave:

People have often criticized Paul for not explicitly insisting on the release of Onesimus, but if you read carefully, you will see that what Paul suggests is far more radical. Paul asks Philemon to receive Onesimus as a true brother in Christ, which if he were to actually do, would very naturally make it impossible to continue to enslave him. Paul understands that the hearts of men cannot be changed by law, but only through the gospel.

While it is true that Christ and the apostles did not abolish slavery, it is also the case that the consequences of the gospel would tend to ameliorate if not eliminate such (seen in Paul’s letter to Philemon).[1]

Had Christ or Paul ordered the end of all slavery, it would have rendered the gospel revolutionary and made its central concern social, political and economic equity. If Paul, for instance, had simply commanded Philemon to free Onesimus and not suggested that he be emancipated as a consequence of the new relationship that they sustained in the gospel, Christians would have viewed such an apostolic command as binding, necessitating the abolition of slavery immediately everywhere. This would have obscured the true spiritual message of the gospel—salvation in Christ to all that believe on Him—and have rendered the Christian faith another competing, indeed radical political agenda, especially in the Greco-Roman world, with so much of the population in slavery. The New Testament contains no explicit commands to abolish slavery—though it prohibits man-stealing (I Timothy 1:10) and thus proscribes American slavery—leaving it to the outworking of the gospel to address such in the Greco-Roman world of its day.[2]

[1] As seen in the practices of Christians in the early church, in A. J. Harrill The Manumission of Slaves in Early Christianity. (Tubingen: J. C. B. Mohr/Siebeck, 1995). Though opposition to slavery itself, as opposed merely to slavery’s abuses, was long in coming, as seen in Trevor Dennis, “Man Beyond Price: Gregory of Nyssa and Slavery,” in Heaven and Earth: Essex Essays in Theology and Ethics, ed. Andrew Linzey and Peter J. Wexler (Worthing, West Sussex: Churchman Publishing Limited, 1986), it was Christianity, or Christendom, at least in part, that brought slavery to an effective end between the fourth and tenth centuries, with serfdom developing in seignorialism and feudalism subsequent to slavery’s diminution.

[2] Though Kyle Harper, in Slavery in the Late Roman World, AD 275-425 (New York: Cambridge University Press, 2011), showed that slavery lasted deep into the Christian era, in his most recent book, From Shame to Sin: The Christian Transformation of Sexual Morality in Late Antiquity (Cambridge, Mass.: Harvard University Press, 2013), he shows that Christianity’s strict moral code was particularly sympathetic to the sexual exploitation of the slave. So Christianity played an important role in reforming and ultimately ending ancient slavery.

Timfost on the Puritan Board explains the difference between modern communism and the “communism” in the book of Acts:

Kuiper explains that Jerusalem “communism” says “what’s mine is yours.” Modern communism says “what’s yours is mine.”

Dr. Art Lindsley at the Institute for Faith, Work and Economics, after explaining that Acts 2-5 did not involve forced government control of or redistribution of property:

You can’t get the imperative out of the indicative. You have to show that the historical precedent in Acts 2-5 is a mandatory prescription for all later Christians. Can you get the imperative (all Christians should do this) from the indicative (some early Christians did this)? You can try with all your might, but you will never cross the divide. The fact that some Christians “shared all things” (with some qualifications) does not constitute a command that all Christians should follow their example. The one way you could cross this divide is by showing that other Biblical passages command socialism.

“According to the science of biology, people were not “created.” They have evolved. And they certainly did not evolve to be “equal.” The idea of equality is inextricably intertwined with the idea of creation. The Americans got the idea of equality from Christianity, which argues that every person has a directly created soul, and that all people are equal before God. However if we do not believe in the Christian myths about God, creation, souls, what does it mean that all people are created “equal”? Evolution is based on difference, not on equality. Every person carries a somewhat different genetic code, and is exposed from birth to different environmental influences. This leads to the development of different qualities that carry with them different chances of survival. “Created equal” should therefore be translated “evolved differently.”” [Read more of the quote in context here.] 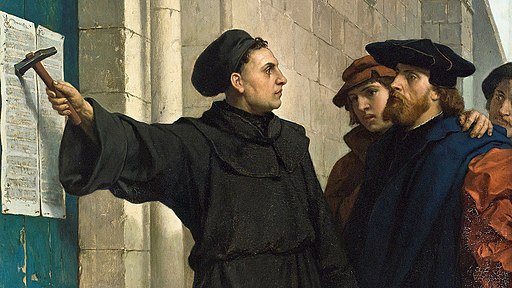 Reformation SA.org on the political and social fruits of the Protestant Reformations:

“Sola Scriptura eroded the foundations of ecclesiastical and political totalitarianism. Instead of the prevailing “Rex Lex” (the king is the law), the Reformers championed “Lex Rex” – the Law is king! No one is above God’s Law… The Protestant emphasis on the Priesthood of all Believers led to the concept of representative republics and democratic forms of government. It fostered freedom of religion and freedom of conscience which led to freedom of speech, freedom of the press, freedom of association and all the other out-workings of political and social freedom.”

“Since then your serene Majesty and your Lordships seek a simple answer, I will give it in this manner, neither horned nor toothed. Unless I am convinced by the testimony of the Scriptures or by clear reason (for I do not trust either in the pope or in councils alone, since it is well known that they have often erred and contradicted themselves), I am bound by the Scriptures I have quoted and my conscience is captive to the Word of God. I cannot and I will not recant anything, since it is neither safe nor right to go against conscience. May God help me. Amen." (Reply to the Diet of Worms, April 18, 1521)” ~Martin Luther, Luther's Works, 33: Career of the Reformer III
A Ruby In The Rough
Create a free website or blog at WordPress.com.
%d bloggers like this: